A Cessna 185 was on a night visual flight rules flight from Peace River Airport, Alberta, to Fort St. John Airport, British Columbia. At approximately 1817 Mountain Standard Time, the aircraft struck the ground 12 nautical miles east of the Fort St. John Airport. The pilot, and sole occupant, of the aircraft sustained fatal injuries. The aircraft was destroyed by impact forces and there was no post–impact fire. The 406 MHz emergency locator transmitter activated on impact.

The pilot then departed at 1706, reporting westbound at 4500 feet above sea level (asl). Between 1719 and 1755, the pilot engaged in 2 text message exchanges and conducted 5 voice cell phone communications totaling 28 minutes. The pilot received a final text message at 1806, 11 minutes before the aircraft impacted the ground. 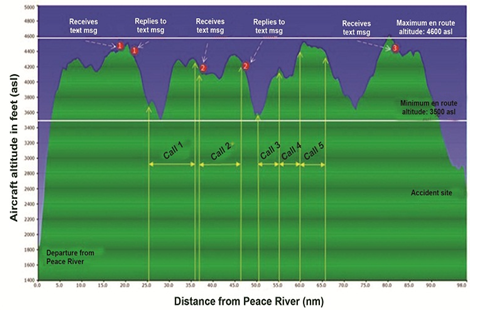 At 1809, 23 nm east of the Fort St. John Airport, the aircraft began a gradual descent of approximately 170 feet per minute, with a ground speed of 90 knots. (Ground elevation was approximately 2400 feet asl at the accident site.) The aircraft was 18 nm east at 3200 feet asl at 1813 when the pilot was in contact with the Fort St. John Flight Service Station (FSS). The pilot was given all appropriate aerodrome information for approach and landing. There were no further communications with the FSS.

From 1815 to 1816, the pilot momentarily leveled off at 2900 feet asl, 15 nm east of the airport, before resuming the descent. The descent continued uninterrupted until the last radar contact at 1817, 12 nm from the airport at 2400 feet asl.

The aircraft contacted the tree tops at approximately 75 feet agl. The middle of the left wing strut was struck from below and slightly forward. This caused the strut to buckle upward, resulting in the strut’s wing and fuselage fittings to fail due to the overload force exerted upon them. With the strut detached, the left wing lifted up and broke free of the fuselage at the wing attachment fittings. The left wing and strut were found approximately 209 feet from where the left wing had struck the trees.

After the left wing had separated from the aircraft, it rolled to the left and continued to descend, impacting the ground on its left side 370 feet from where the left wing was found. The aircraft bounced a further 40 feet before coming to rest on its back.

The cockpit instruments were largely destroyed as a result of the impact. The tachometer face was recovered indicating a power setting of 2400 rpm. The altimeter was not recovered; therefore, it could not be determined if it was set to the Fort St. John Airport altimeter setting.

There had been no outstanding mechanical defects had been reported concerning the aircraft and it was being operated within the applicable weight and balance limitations for the flight. Conditions at the time of the occurrence were conducive for night visual flight rules (VFR) flight. Approximately 34% of the moon’s face was visible.

The gradual rate of descent, constant ground speed and flight path would also suggest that the aircraft was under the control of the pilot. The aircraft had experienced several large altitude deviations while the pilot was using his cellphone. While it did not appear that the pilot was actively engaged in cell phone communications during the last 11 minutes of the flight, this distraction was prevalent throughout the flight and in conjunction with the night conditions encountered, may have contributed to the CFIT event.

The findings from the TSB include: